Back to the services

Acupuncture has been used for thousands of years with obvious benefits to both humans and animals. 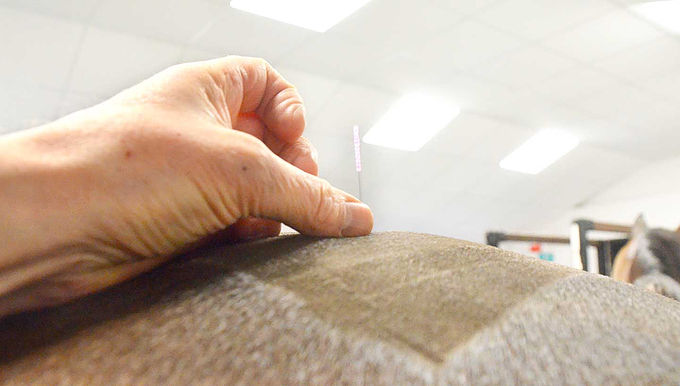 Recently the neurophysiological mechanisms of action have been evaluated and understood from a scientific basis and have been carefully documented and audited.
This has led to the technique being accepted into the mainstream of medicine and the benefits for a wide range of conditions recognised.

Many insurance companies will cover acupuncture treatment costs as part of a horse’s treatment regime, so check your policy.

By law, acupuncture can only be performed by a suitably qualified veterinary surgeon and all vets at the practice are qualified to give acupuncture treatments.
Our service is overseen by Dr Stuart Thorne who is a member of the Association of British Veterinary Acupuncturists.

HOW DOES IT WORK?
The process involves inserting fine, sterile needles that stimulate nerve endings which carry impulses to the spinal cord and brain.
This results in responses within the nervous and endocrine systems, leading to the release of neurotransmitters and hormones.

These in turn influence the function of the body tissues and organ systems.
Acupuncture also increases the release of natural painkillers such as endorphins, enkephalins, serotonin and noradrenaline which act on the pain pathways and can block the transmission of pain signals.
The needles may be manipulated by hand or attached to an electroacupuncture unit to increase the intensity of the stimulation.

We use acupuncture points, myofascial trigger points i.e., hyperirritable areas within a taut band of muscle, and tender points, together with needling of appropriate spinal segments.

WHAT CONDITIONS CAN ACUPUNCTURE BE USED FOR?
Acupuncture can be used in isolation, but we tend to use it as a therapy following an orthodox clinical diagnosis and in conjunction with conventional treatment modalities such as extracorporeal shock wave therapy and or medication.

It is particularly useful in the relief of musculoskeletal disorders especially chronic pain including sacroiliac pain, arthritis and muscle soreness especially of the neck, shoulders, back and hindquarters.

Treatments take about 30 minutes and the number and interval of follow-up treatments varies with the condition, with once a week for two to four weeks and then wider intervals being common.

CASE STUDY
Tom, a 10-year-old competition horse experienced a loss of form. The rider felt he lacked impulsion and was concerned that he was just not his normal forward going self.
Investigations at the clinic identified a subtle hind limb lameness and a bone scan revealed a sacroiliac strain.

Treatment comprised a period of rest combined with extracorporeal shockwave therapy and electroacupuncture. He appears to have made a complete recovery and this season is back competing and winning.

We use cookies on our website to give you the most relevant experience by remembering your preferences and repeat visits. By clicking “Accept All”, you consent to the use of ALL the cookies. However, you may visit "Cookie Settings" to provide a controlled consent.
Cookie SettingsAccept All
Manage consent

This website uses cookies to improve your experience while you navigate through the website. Out of these, the cookies that are categorized as necessary are stored on your browser as they are essential for the working of basic functionalities of the website. We also use third-party cookies that help us analyze and understand how you use this website. These cookies will be stored in your browser only with your consent. You also have the option to opt-out of these cookies. But opting out of some of these cookies may affect your browsing experience.
Necessary Always Enabled
Necessary cookies are absolutely essential for the website to function properly. These cookies ensure basic functionalities and security features of the website, anonymously.
Functional
Functional cookies help to perform certain functionalities like sharing the content of the website on social media platforms, collect feedbacks, and other third-party features.
Performance
Performance cookies are used to understand and analyze the key performance indexes of the website which helps in delivering a better user experience for the visitors.
Analytics
Analytical cookies are used to understand how visitors interact with the website. These cookies help provide information on metrics the number of visitors, bounce rate, traffic source, etc.
Advertisement
Advertisement cookies are used to provide visitors with relevant ads and marketing campaigns. These cookies track visitors across websites and collect information to provide customized ads.
Others
Other uncategorized cookies are those that are being analyzed and have not been classified into a category as yet.
SAVE & ACCEPT